Mahalo nui loa to the Artists + Sponsors + Staff + Audience who created THREE WALLS on Sat﻿urday May 11, 2013...
It required the Energy of all to make it a truly epic night in urban paradise!!
Official Photos from THREE WALLS MUSIC FESTIVAL 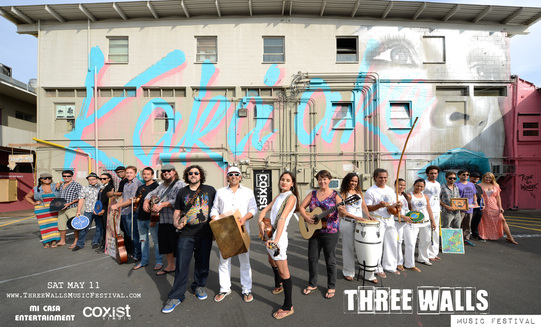 ::: Save the date SAT MAY 11, 2013 for this Urban Arts Festival which will feature an eclectic world spectrum of MUSIC + DANCE + ART + FOOD
::: Our mission is to enhance the vibrant and innovative Kaka'ako Arts District of Honolulu, where the common currency is CREATIVITY
::: THREE WALLS will be INDOORS (inside CoXist Studio) + OUTDOORS (within the 3 walls of the adjacent Parking Area)
::: Connect with our THREE WALLS Community for FREE TIX + SPONSOR GIVEAWAYS on Facebook
::: Check all the tabs on this Website to get familiar with the entire FESTIVAL LINE-UP
::: Presented by Mi Casa Entertainment + CoXist Studio
::: 331 KEAWE STREET, HONOLULU, HI 96813
::: BUY ADVANCE TIX NOW!!